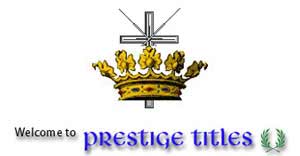 Even Canadian Churches would appear to be getting in on the Fake Title selling business, as you might like to view the tempting offers on this site.

“Through Prestige Titles you can become a Knight or a Lord, or obtain an Honorary Doctorate. How is this possible? These titles are awarded by the Church of St Lazarus, Alberta, Canada, in recognition of valuable support for their charitable work – not only do you get an exciting title to use as you wish, but you also get to help genuinely needy people with the charitable work done by the Church.

Under Canadian law the Church is able to award honorary titles, and we have been appointed their sole World-wide agents for ecclesiastical knighthoods and honorary doctorates. The passage fees for titles are set to reflect the donation made to charitable funds and to cover commission fees paid to agents.”

But they entice the willing victim further with:

Also available on request from the Church of St Lazarus are the following titles. Please contact us for more information and costs:

And finally, for a fee, they can even help with Immigration to Canada, truly a church that can work miracles!

Details can be found on the Prestige Titles site; strangely though it a .co.uk domain, so I wonder how much the church actually receives from this title selling business?

It would appear that they have gone out of selling their ‘titles’ directly and now are merely signed up to a franchise deal with Noble Titles, as the Link above goes straight through to their site; however, we will keep an eye on the situation.